Eternity Springs is a magical place where hearts come to heal–with a little help.

Series: Eternity Springs (may also be read as a standalone)

Dark, brooding Jack Davenport hides his secrets well, never telling his wife about the dangers of his job, never sharing his thoughts or worries . . . never sharing himself. After tragedy strikes, their marriage shatters. Now a threat to Catherine Blackburn’s life brings her back into his–and gives them a second chance.
A reporter whose most recent investigation has ignited a national controversy and put her in harm’s way, Cat thinks she can handle herself. So when Jack grabs her off the street and sweeps her to his home above Eternity Springs, she’s furious.
In the warm sanctuary of the Eternity Springs community, Jack and Cat face the heartache that drove them apart. But can they find the courage to pick up the pieces of a shattered love? 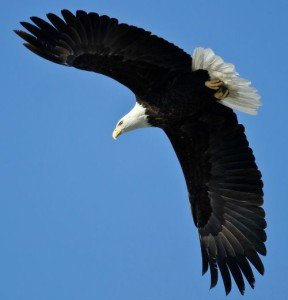 Feeling better about the world than she had in weeks, Cat relaxed. She dozed for a bit, then awoke slowly, soaking in the sun and drinking in the sound of water crashing over stones, and the comfort of the small dog resting beside her. This was a little piece of paradise, wasn’t it?

When a yellow butterfly danced across the air above her, she watched it until something higher in the sky caught her notice.

The bird was huge, with a wingspan of at least six feet as it soared and circled above the valley. Cat sat up and shielded her eyes with her hand, watching the bird’s majestic presence. Was that an eagle? She wasn’t sure. She’d never seen an eagle in the wild, but since Jack had told her his estate was named Eagle’s Way, she wouldn’t be surprised.

As she watched, the bird suddenly turned and dived toward the ground. As he came closer, she saw the familiar bald head and decided that yes, he had to be an eagle. How cool was this?

He swooped down upon the meadow and she heard a cry, then he rose with his prey – a rabbit – wiggling in his talons. Cat gave a little shudder, and murmured to Peanut, “I’d better keep a close eye on you whenever we’re outside.” 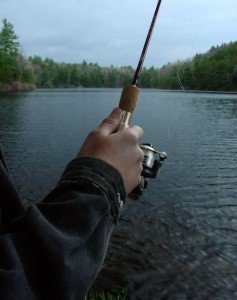 She turned her attention back to the water, and that’s when she saw him. Jack stood downstream some fifty yards or so with a fly rod in his hands. She watched him work the line with a fluid, artistic grace, and an old, familiar yearning washed through her.

Those hands. Those talented hands. They’d made her body sing like none before and none since.

Suddenly he yanked back on the rod. Color flashed on the surface of the stream as he reeled the rainbow trout in. Once he had the wriggling fish gripped securely in his hand, he looked her way. The predatory triumph in his eyes brought the eagle to mind.

A frisson of apprehension skittered up Cat’s spine. This might be her opportunity, but she was in his territory. She’d best keep watch on more than the sky while she was in Eagle’s Way. 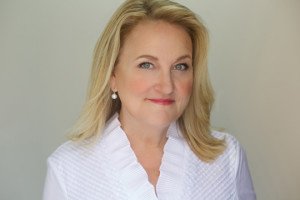 Emily March is the New York Times, Publishers Weekly, and USA Today bestselling author of over thirty novels, including the critically acclaimed Eternity Springs series. Publishers Weekly calls March a “master of delightful banter,” and her heartwarming, emotionally charged stories have been named to Best of the Year lists by Publishers Weekly, Library Journal, and Romance Writers of America. A graduate of Texas A&M University, Emily is an avid fan of Aggie sports and her recipe for jalapeño relish has made her a tailgating legend.

Praise for the Eternity Springs Series…

“For a wonderful read, don’t miss a visit to Eternity Springs.”—Lisa Kleypas

“With passion, romance, and revealing moments that will touch your heart, [Emily March] takes readers on an unhurried journey where past mistakes are redeemed and a more beautiful future is forged–one miracle at a time.”—USA Today

I was a Children's Librarian for 8 years and worked in Administration for several more. I love blogging about books, information, and other library related topics. Most of my blogs are book reviews. View all posts by Allie