***Special thanks to Jon Wooten of Charisma House for sending me a review copy.***

My review: Winter Promise made me instantly biased in its favor when the main character decided to build and run a town library. I enjoyed reading this book in much the same way that I enjoy a bowl of mashed potatoes. It may not be a four course meal or a spicy Mexican dish, but it hit the spot. It’s good comfort “food.” I like the town of Porterfield, Texas and the Muldoon family. It’s a friendly place and a lively family. The romantic possibilities for Abigail keep the reader guessing and add some humor and drama. She is a feisty and engaging character with an independent spirit which I liked. It was easy to see why the men fell for her. I also thought the author did a good job of portraying the doctor’s inner struggle as he fought his feelings and was forced to deal with the pain of his past. Overall, a lovely and comforting story. 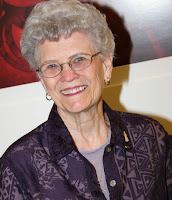 Martha Rogers is the author of Becoming Lucy; Morning for Dove; Finding Becky; Caroline’s Choice; Not on the Menu, a part of a novella collection with DiAnn Mills, Janice Thompson, and Kathleen Y’Barbo; and River Walk Christmas, a novella collection with Beth Goddard, Lynette Sowell, and Kathleen Y’Barbo. A former schoolteacher and English instructor, she has a master’s degree in education and lives with her husband in Houston, Texas.

A painful past has left Doctor Elliot Jensen uninterested in love.

Until he meets Abigail.

Single, educated, and looking for a new start, Abigail Monroe decides to join her brother and his wife in Portersville, Texas. Near her twenty-fifth birthday and without a suitor, she fears she will become a spinster if she stays in Briar Ridge, Connecticut.

A sprained ankle sends Abigail to the new doctor in town, Elliot Jensen. He is smitten, but tragedy in his past has left him bitter, guilt ridden, and afraid to fall in love again.

When the town’s deputy sheriff rescues Abigail after a robbery, Elliot’s feelings for her get stronger. He is jealous of the attention Abigail is getting, but he fears he can’t compete with the handsome deputy sheriff and his heroic deeds.

Has he waited too long to share his feelings for her? Or will Christmas bring them both the gift they seek?

Set in the late 1800s, the Seasons of the Heart series follows the lives of four women and their families, weaving together their stories of faith, life, and love as they bond in friendship only God could orchestrate.