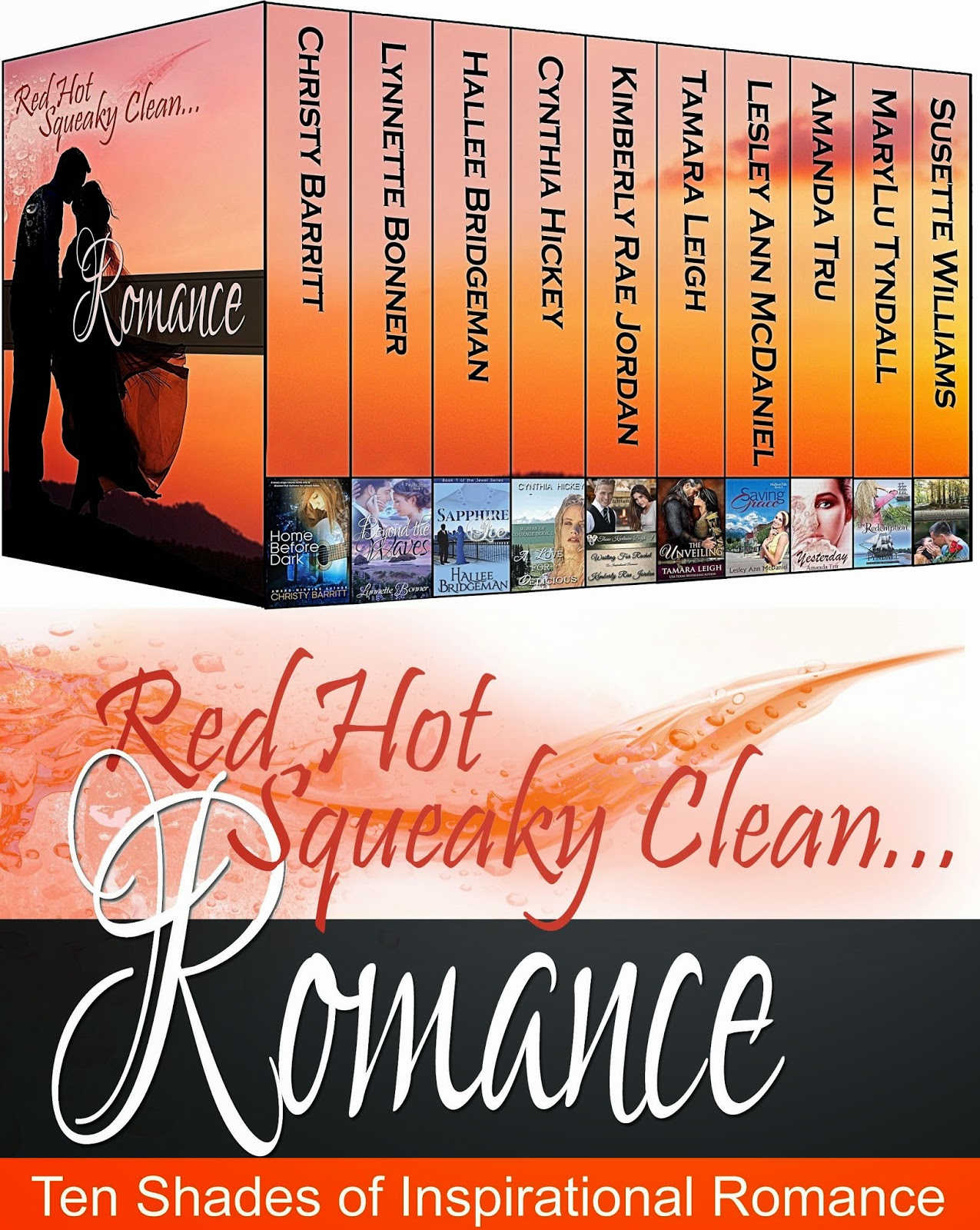 
Ten best-selling Inspirational romance authors come together
to bring you the Red Hot Squeaky Clean Romance collection! If you’re
anything like us, you enjoy reading various genres — a cozy mystery, a
thrilling suspense, an adventurous historical, a catchy contemporary — we love
them all as long as the romance is piping hot and the story is comfortably
clean. For the first time ever, as you turn the pages of these complete stories,
you will meet ten of the most recognized names in inspirational romance today
and read their award winning, critically acclaimed stories all in the same
collection. You’re in for such a treat!

Home Before Dark by
Christy Barritt
Daleigh McDermott finds a journal penned by her late
father which sparks a dangerous investigation into his death with the assistance
of Ryan Shields, the only man who believes her.

Beyond the Waves;
Pacific Shores Series, Book 1, by Lynnette Bonner
Officer Kylen
Sumner and Taysia Green have a history. He’s broken her heart more than once. So
when he returns home claiming he just might be in love with her, she wants
nothing to do with him. If only her heart would get the message!

The men in unbeliever Robin Bartlett’s life have only ever been users.
Believer Tony Viscolli’s arrival and relentless interest in Robin both
infuriates and intrigues her.

A Love for Delicious; Woman of
Courage series, Book 1, by Cynthia Hickey
Widowed newlywed Delicious
(Delly) finds herself stuck with 5 stepchildren all under age 13 on the opposite
side of the country from Oregon and their uncle. She hits the trail, promising
to do anything to gain the children their birthright and protect it from those
out to take it. Can she guard her heart against the handsome trail guide, Zeke
Williams?

Waiting for Rachel; Those Karlsson Boys, Book 1, by
Kimberly Rae Jordan
Rachel Perkins is a loner who feels certain she’s
not the right woman for Damian Karlsson. Damien feels otherwise and is willing
to do what it takes to change her mind and her heart.

The
Unveiling; Age of Faith series, Book 1, by Tamara Leigh
Disguised as
a squire, Lady Annyn Bretanne sets off on a quest to avenge her brother’s murder
by Baron Wulfrith. When her disguise is unveiled, they each face tests of faith
and resolve.

Saving Grace; Madison Falls, Book 1, by Lesley
Ann McDaniel
Grace is an opera singer forced by a stalker to go into
hiding in a small town. There, in that most unexpected of places, Grace finds
elusive love and claims her faith.

Hannah has the ability to time travel but there are consequences. After
saving a family injured in a car accident, Hannah wakes the next morning to find
her yesterday was five years ago!

The Redemption; Legacy of the
King’s Pirates, Book 1, by MaryLu Tyndall
Lady Charlisse Bristol
sets off on a voyage in search of the father she never knew, only to find
herself shipwrecked on a desert island. Near starvation, she is rescued — by a
band of pirates and their fiercely handsome leader, Edmund Merrick.

Falling in Love; Seasons of the Heart novella series, Book 1,
by Susette Williams
Summary: Katie Morgan thinks she’s doing her boss,
Wade McAlester, a favor by setting him up on blind dates. After Katie plays
matchmaker and sets Wade up with all kinds of zany ladies, Katie starts to
realize that Wade might be suited for her.